The Fight Against Major Depression

The Treatment of Major Depressive Disorder can come in a variety of treatments, medicines, and therapies, and sometimes a mix of practices... 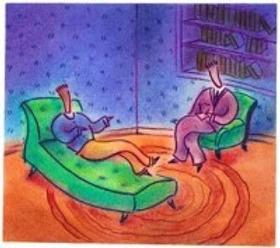 The Treatment of Major Depressive Disorder can come in a variety of treatments, medicines, and therapies, and sometimes a mix of practices.

Treatment for Major Depression exists in many possibilities and usually a combination of treatments is recommended course of action. One of the most well known treatments for Clinical Depression is medication, which comes in the form of antidepressant pills that are taken regularly, which help in stimulating the chemicals that exist between the neurons in the brain. The most common types of anti-depressants subscribed by psychiatrists are Selective Serotonin Reuptake Inhibitors (SSRIs), Serotonin-Norepinephrine Reuptake Inhibitors (SNRIs), and Monoamine Oxidase Inhibitors (MAOIs). There also exist other types of anti-depressants such as Tricyclic Antidepressants (TCAs) and Tetracyclic Antidepressants (TeCAs), however, these drugs have much stronger and more serious side-effects and are much less common. SSRIs are usually the first considered when using medication to fight Major Depressive Disorder because they usually produce less harmful side-effects than the other types of antidepressants. SSRIs work by increasing the level of Serotonin between synapses in the brain. SNRIs are a newer form of antidepressant medication and have similar side-effects to SSRIs. These antidepressants work by increasing the levels of Norepinephrine and 5-HT between synapses in the brain. MAOIs are usually seen as the last option of prescribable medicine if the SSRIs or SNRIs don’t work. These antidepressants work by blocking the enzyme monoamine oxidase, which breaks down serotonin, norepinephrine, and dopamine in the brain, thereby raising the levels of these neurotransmitters in the brain. It is also important to note that most antidepressants take anywhere from 2-6 weeks before they take effect.

Therapy is seen as another effective option to help fight one’s Major Depression, and usually, therapy is mixed with taking an antidepressant.Therapy can come in several types including talk therapy, cognitive behavior therapy, interpersonal therapy, psychodynamic therapy, and in extreme cases, electroconvulsive therapy may be used. Talk therapy is a very simple treatment option because it allows the individual to talk one-on-one with a psychiatrist or in groups about the Clinical Depression that he or she is facing with the goal to overcome this mental illness. Moreover, with the internet, this treatment path does not always have to be in person since there are many online treatment options, such as website and chat forums where one can talk to psychiatrists or others who are also facing Major Depression. Cognitive behavioral therapy, interpersonal therapy, and psychodynamic therapy are often used in a blended approach as the next option to therapy treatment. These techniques rely on working to fix the thinking process in the individual’s brain and have been shown to be most effective in adolescents and older people. Electroconvulsive therapy is used as one of the last therapy options for treating Major Depressive Disorder and is usually only used in severe cases. This therapy consists of sending pulses of electricity through the brain of the patient in order to correct the patient’s brainwaves that may be making him or her depressed.

Other Medicine and Therapy Options

For those who do not go the traditional therapy route, there also exist other types of therapies for Major Depression such as herbal medicine, acupuncture, exercise and dieting, and relaxation techniques. Herbal medicine just like antidepressant medication has side-effects and the individual’s medical physician should be aware that the individual is taking these medicines to ensure the safety of the patient. Herbal medicine has yet to prove itself against the traditional antidepressants for effectiveness against Clinical Depression. Acupuncture therapy and relaxation techniques such as meditation, yoga, and tai chi are also practiced at times by individuals with Major Depressive Disorder. It is said that these practices work to alleviate the emotional stress on the body to make it happy again. Lastly, dieting and exercise are known to create positive impacts for people experiencing Major Depression by releasing giving the individual more energy and releasing emotional build-up.

One more way that an individual can approach his or her Clinical Depression and to help in the research for development of new treatments for Major Depressive Disorder is for the individual to sign up for a Clinical Research Trial.Clinical trials are a very important process in the development of a new medicine or treatment of Clinical Depression for public use that requires a group effort between the treatment developers, the psychiatrists, and the participants in the trial. Clinical Research Trials are a great way for an individual to seek the help that they need for his or her Major Depression as well as to help those who will be suffering the same depressive mental illness in the future. In clinical trials, the patient will get to interact with psychiatrists, take tests, and possibly be paid and receive benefits for their service to science! All clinical trials differ by length of time and by phase that the treatment study is in. There are four phases of the clinical trial process.

For more information on major depression or to sign up for a clinical trial, please contact Precise Research Centers at 601-420-5810 or visit www.precise-reasearch.com